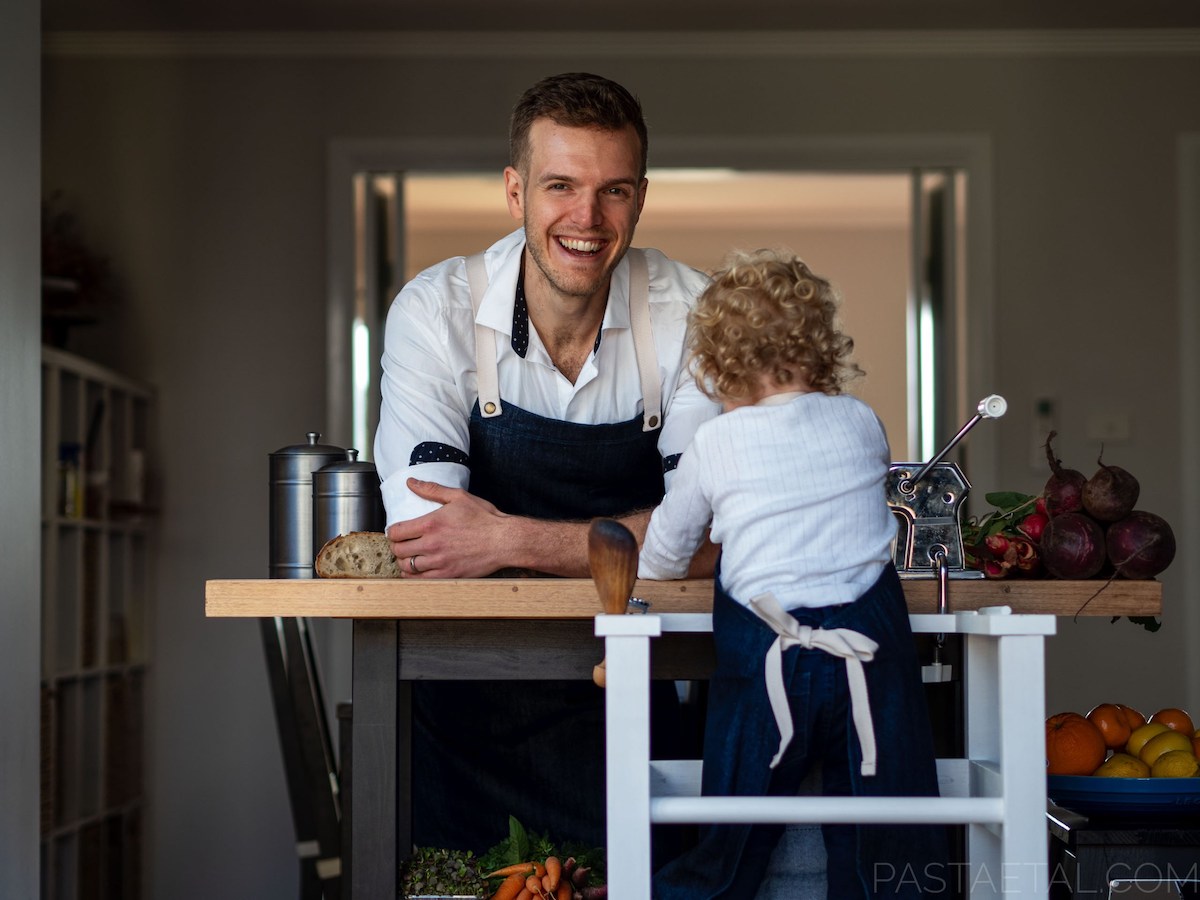 This Father and Son Make Pasta Together Every Sunday: An Interview with Pasta et Al

As part of our Pastai Talks Instagram live interview series, we sit down with Alec Morris, the mastermind behind the Australian pasta blog, Pasta et Al, to learn more about his family tradition of pasta making.

Tell us a little bit more about Pasta et Al and how it got started.

We are two Als–that’s where the name “Pasta et Al” comes from. We’re a father and son pasta blog. My mom’s family is Italian and my nonna always made pasta with us as a kid. So now that I’m starting to have my own family, I decided to record our own traditions through a blog.

How did you get into pasta making?

I’ve always made pasta, but it wasn’t until I had my son that I actually realized it was tied to my identity and connected to my roots.

When I was little, my cousins and I all took turns going to “Nonna’s Pasta School.” Instead of going to daycare, we’d go to our nonna’s house and make pasta for the whole family. I vaguely remember being allowed to knead the dough, and then I was eventually allowed to feed the dough through the machine, and then one day I was allowed to turn the handle with her! We slowly graduated through these stages until one day I could make the whole thing, from start to finish.

At the time I took it for granted, but now that I’ve all gotten older and she isn’t around, pasta making has become something that I want to pass on to the next generation. 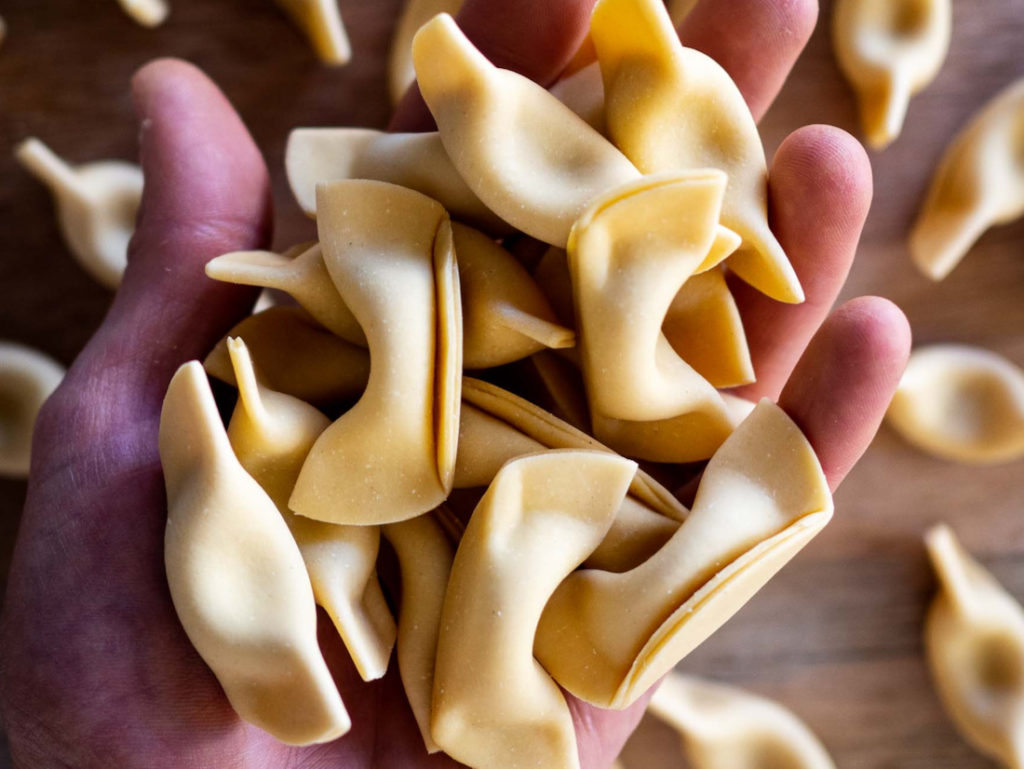 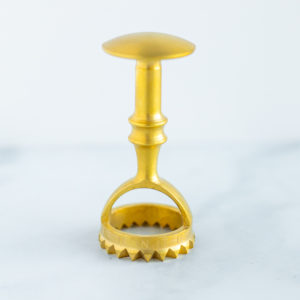 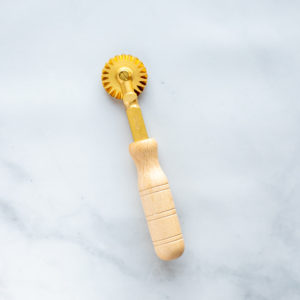 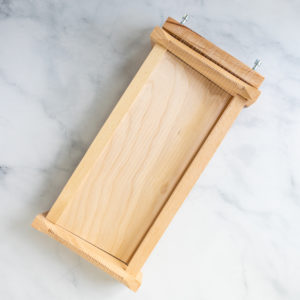 Any lessons that your nonna taught you about pasta making?

This is probably a shared nonna experience, but the idea of recipes and ingredient quantities was never a thing with her. It was kind of like, “Here’s the dry stuff, and here’s the wet stuff, and you just mix it until it feels right.” The biggest thing she taught us is to feel your way through the food. Especially with salt! You know, she just sort of threw in salt here and there…

How would you describe your style of pasta making?

I don’t know if I necessarily have a style. I do really like the traditional style of pasta, but sometimes I also like to get more creative, like with our 90’s style pasta. Of course, it’s not always practical to make these kinds of fancy doughs and shapes, and so sometimes we just pull out the extruder and make some good old-fashioned rigatoni. We love all pasta! 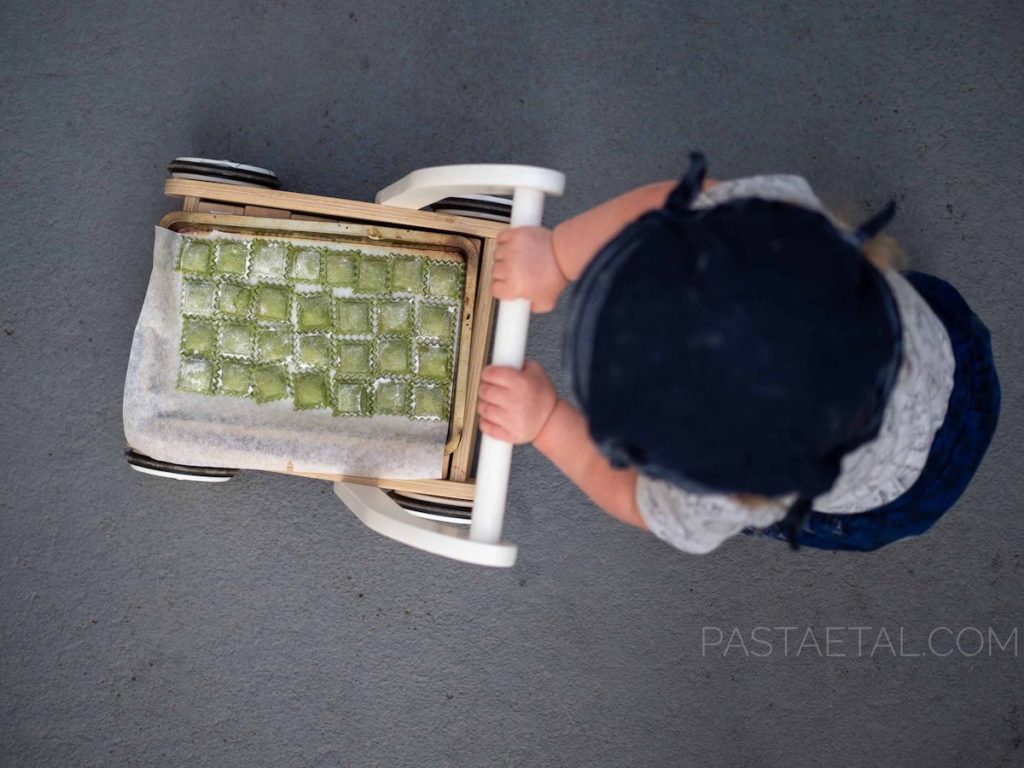 How do you and little Al decide what pasta you’re going to make each week?

We try to keep little Al very involved from the beginning. Sometimes we take him to the markets and he’ll see something he likes and throw it in the trolley–like literally throw it, we get so much bruised produce!–and that will be how we start.

We like playing around with the native flavors. We’ve developed some really good relationships with greengrocers and suppliers, so we do have a little bit of external import here and there. Sometimes we just use whatever is growing out back that we haven’t managed to kill.

I don’t think all of our recipes are perfect, and they’re not for everyone. But we keep doing it because there’s something to be shown in the variety of stuff that you can produce using what’s seasonal and local.

We stick to the classic ratio of 1 egg to 100 grams of flour. Sometimes I also like putting in a little bit of olive oil. The salt varies, sometimes we just add salt in the water, other times we add it to the dough.

I do get really nerdy about the flour. I don’t love doppio zero flour. It can be a bit too stretchy and elastic, so I like to mix it with a harder flour, like whole grain flour. You just have to keep an eye on the protein percentage in the flour.

What do you do when the dough is too dry or too wet?

As it starts to come together, before you start kneading it, you can tell if it needs a little bit more flour or a little bit more water. It sounds really sloppy, but if the dough is too dry, I go and run my hands under the tap and then just get back to kneading. I think people may under knead the dough a bit. My goal is to get the dough as moist as possible without it sticking to anything.

What pasta tools are in your arsenal?

I love gear for any kind of hobby. But with pasta, I’ve been kind of slow to collect a lot. True to my roots, we pretty much just had a knife and a pasta machine growing up.

For ravioli, I’ve got these amazing molds where each of the shapes is slightly offset at an angle and it’s hollow. So each raviolo hangs down underneath and you get that good kind of belly on it when you flip it over. They’re fantastic. I also love the roller cutter. It has a nice clean cut.

We also made a giant pasta board to roll our dough on. It’s made of Tasmanian oak, which is a nice Aussie hardwood. We even made little Al a little tower for him to stand up in while cooking. 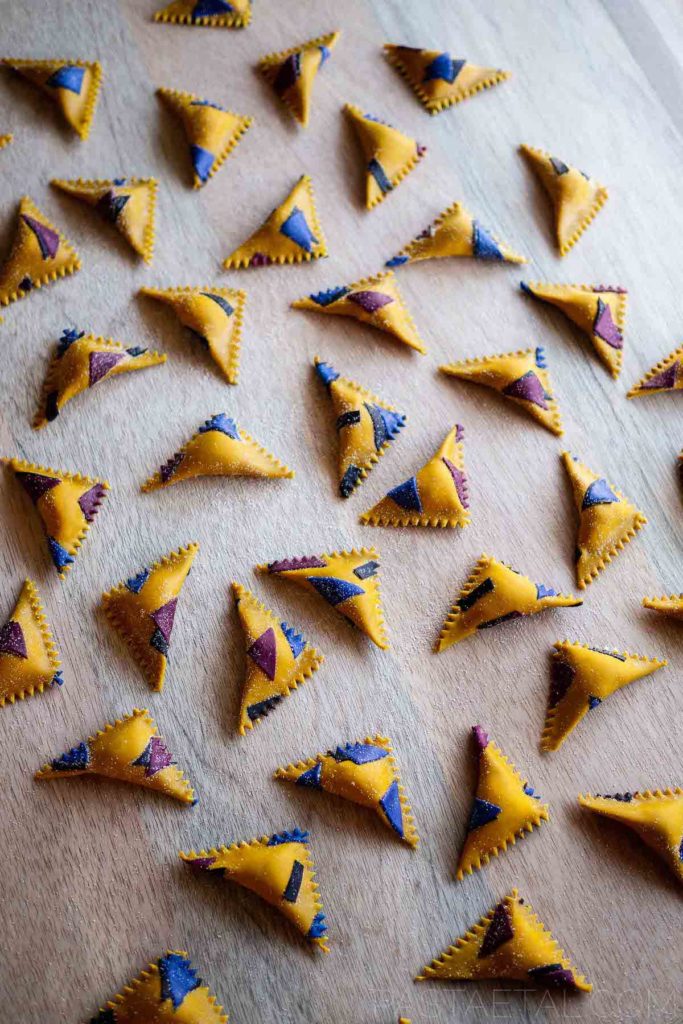 What shapes would you recommend for beginner pasta makers?

I’d say fettuccine or tagliatelle. All you have to do is make a good pasta dough, knead it well, roll it out, and then fold it up and cut it out.

I also think that filled pasta is not as hard as it seems. The trickiest part is keeping the dough from drying out. They can be really quick to make if you have ravioli molds.

What is little Al’s favorite shape at the moment?

I think his favorite is ravioli with a spinach and ricotta filling, which is really sweet because that’s our original family pasta that my nonna would always have in the freezer for us. He likes anything he can poke, too! If it’s a pasta with a soft belly that he can put his little finger into, he’s into it.

And your favorite shape?

I could be really boring and say ravioli as well. It’s hard when you grow up eating all kinds of pasta! But I’d say my favorite pasta to make at the moment are scarpinocc. I think that’s a really satisfying shape to make in terms of process.

What resources do you recommend for pasta inspiration?

We get a lot of inspiration from other pasta makers and chefs on Instagram. It’s fun to see what other kinds of pasta people are making or what unusual ingredients they are using. Also locally at the markets, sometimes seasonal ingredients will take our fancy and we’ll make pasta with them!

I’m not really a recipe book guy–it’s a curse from my nonna of sort of throwing everything together. Still, I do like recipe books for reading about people’s experiences and approach to cooking. So there’s some inspiration from that.

What’s ahead for Pasta et Al?

A lot of people message us asking us when they can buy our pasta or when we’re going to have classes, but right now there’s a lot going on so that might be something for later. Right now, we’re just going to keep making pasta. 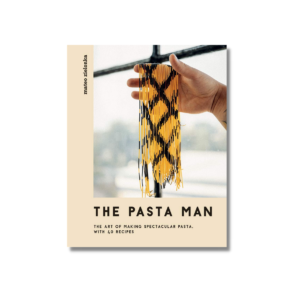 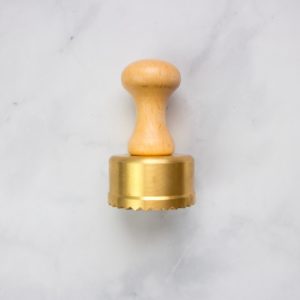 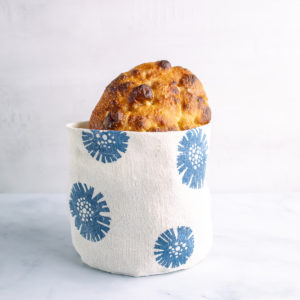 Learn more about Pasta et Al on Instagram @pastaetal and one their blog, pastaetal.com

This interview is part of a series called “Pastai Talks” where we chat with different pasta makers from around the world. 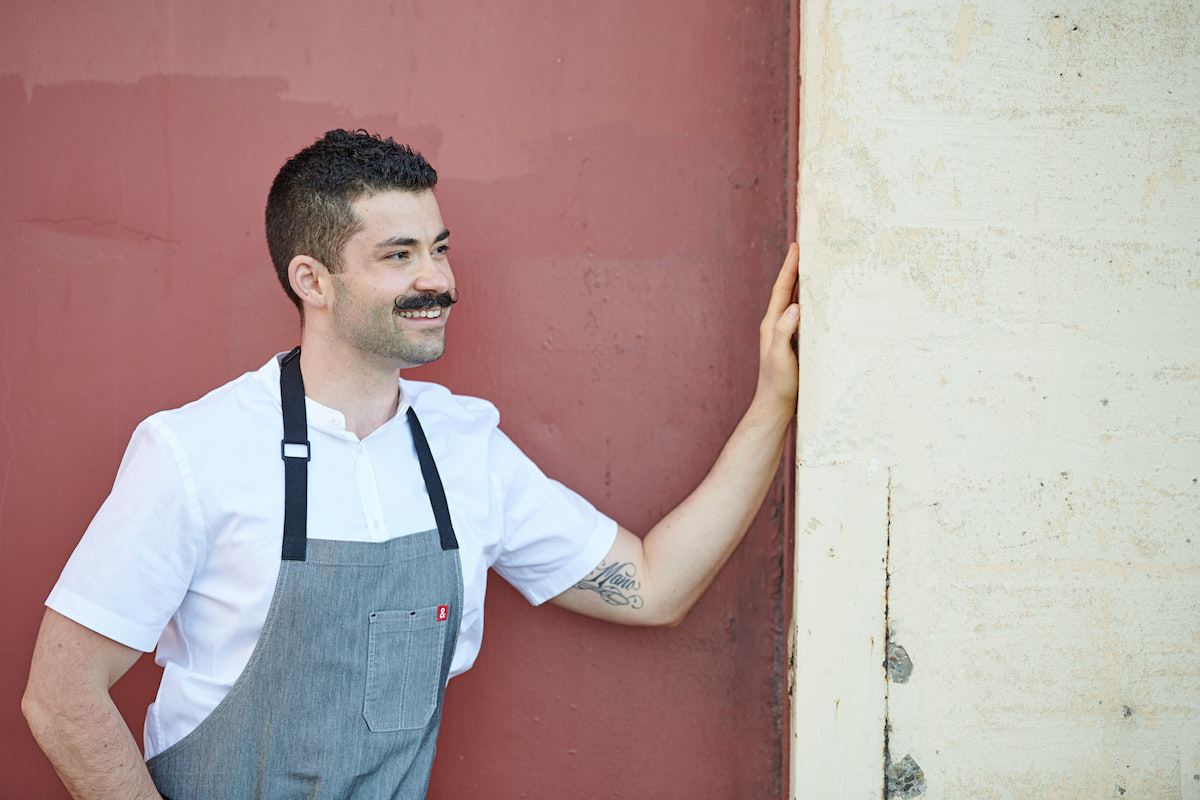 Mastering the art of pasta from unexpected places: An interview with Chef Joe Sasto 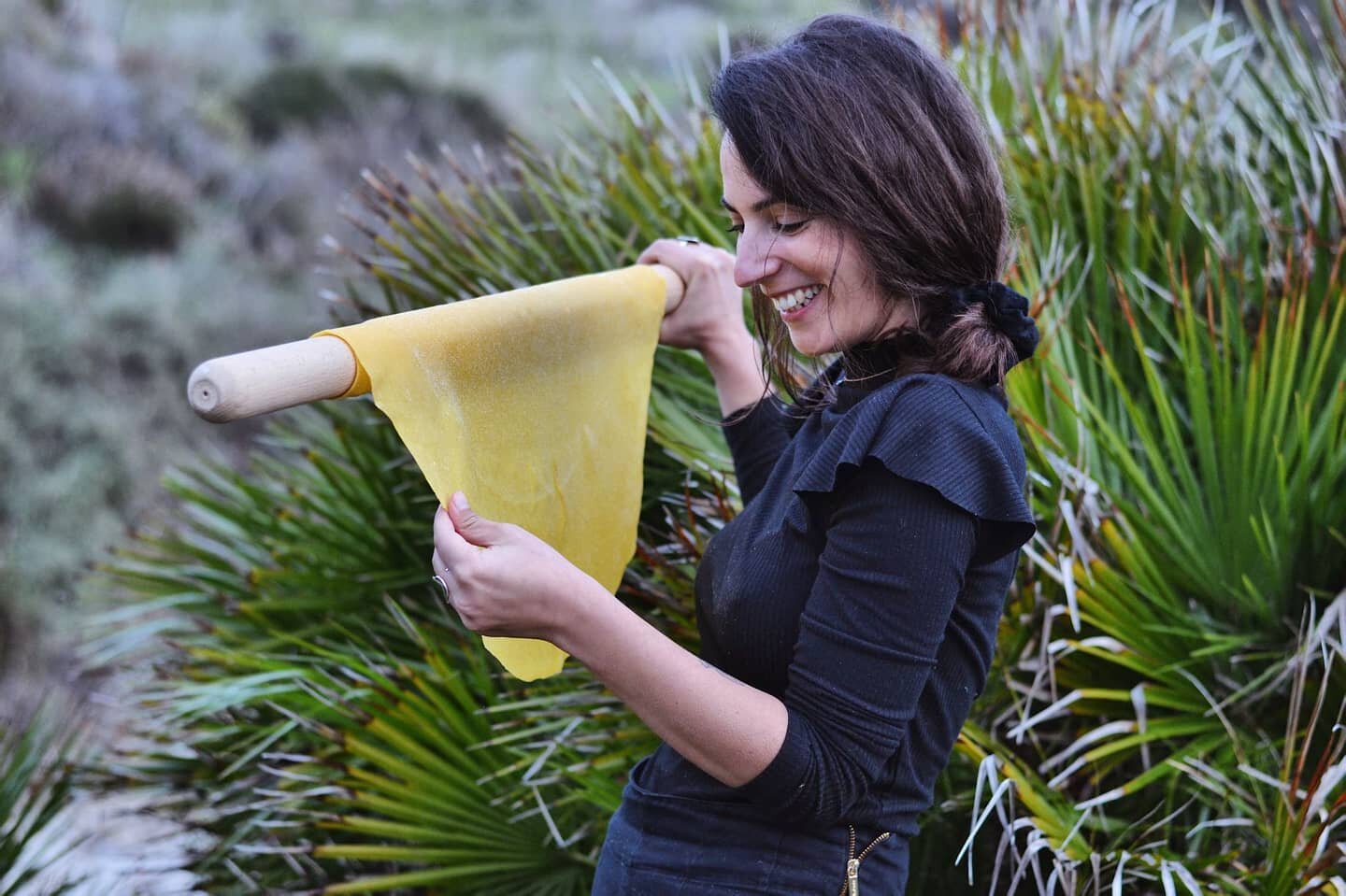 Creating Sustainable Pasta with Sicilian Roots: An Interview with Alessandra Lauria of The Pasta Studio 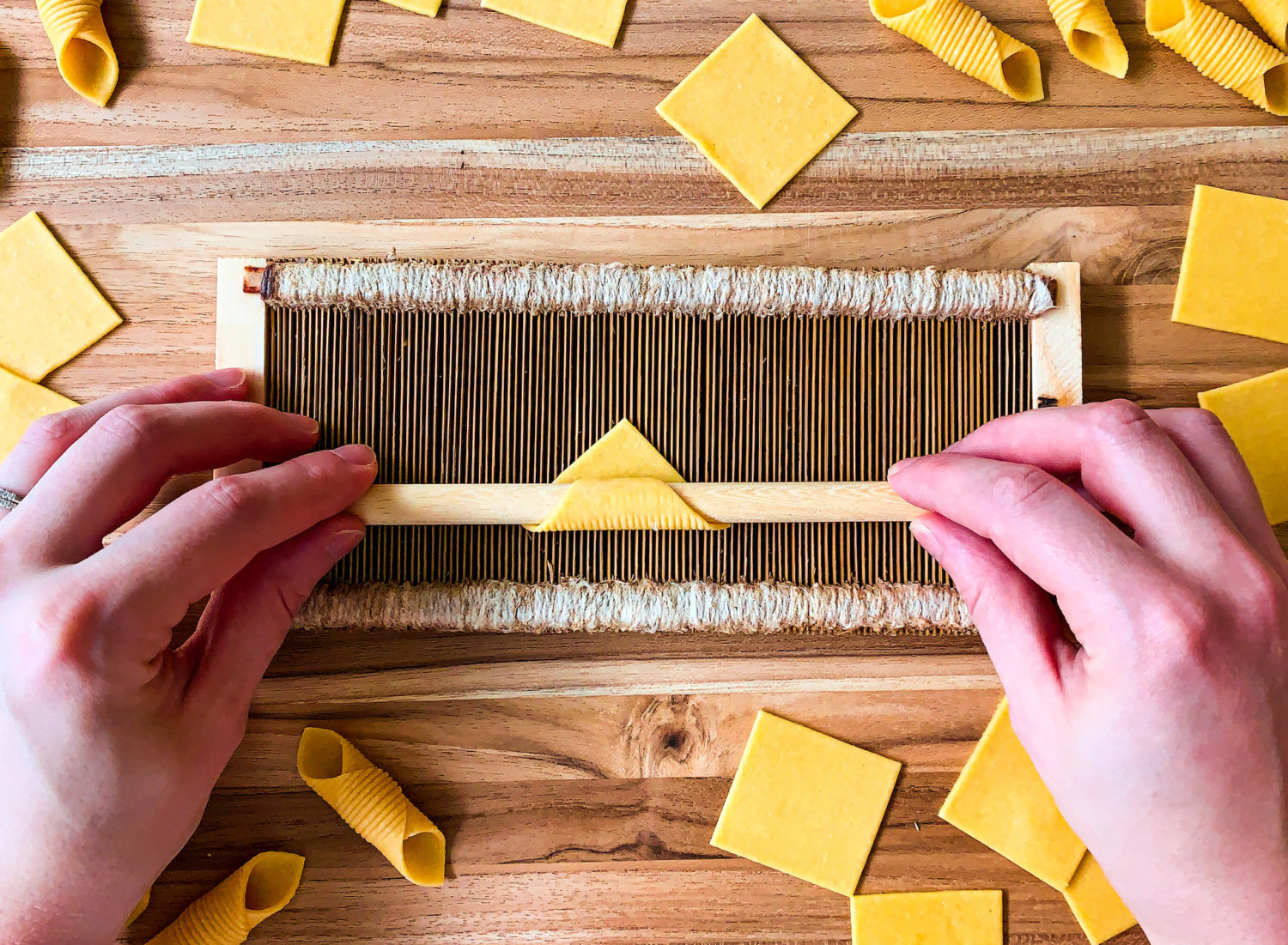 Learning the Ways of the Pastaia: An Interview with Meryl Feinstein of Pasta Social Club